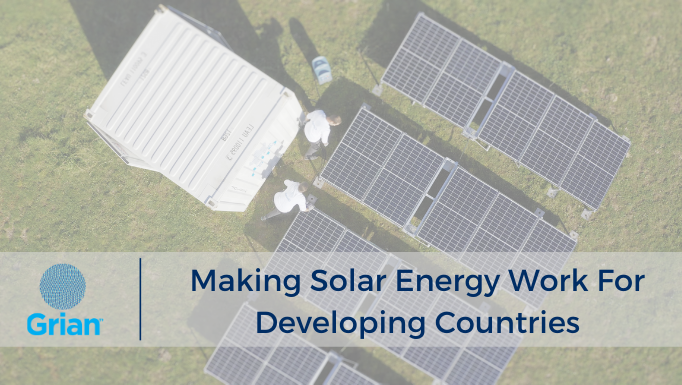 Approximately 16% of the world’s population, around 1.2 billion people, do not have access to electricity. This number would be even higher if the number of people who are connected to a poor quality supply of electricity were also considered. The lack of electricity in many of the world’s developing countries prevents them from progressing.

The building and maintenance of a power grid is unfortunately not possible for many of the developing countries of the world which is why alternative methods of providing electricity, such as the small solar alternative by Grian™, must be considered.

Here at Grian™, we believe that solar energy is the solution for providing electricity to our World’s developing countries. Solar energy will provide a clean, renewable, accessible source of energy for these parts of the globe. In this article, we consider how solar energy can work for developing countries to supply a reliable source of electricity to improve lives and ultimately enable progression.

Fossil Fuels Are Not The Answer

It’s well known that fossil fuels are unsustainable as they deplete the earth’s resources and have a negative global impact. However, they can often seem like the cheapest and most convenient solution for electricity generation in third World countries. In terms of initial investment, a diesel generator has a low cost making it financially viable but the cost of diesel to power these generators is getting higher and higher, making the upkeep more costly than ever.

Secondly, the importing of diesel can encounter logistical issues especially during times of natural disasters or civil unrest. Mali encountered problems importing diesel during 2012 when conflict arose which led the country to experience mass blackouts. Finally, generators are extremely inefficient to power larger areas such as whole towns and cities. 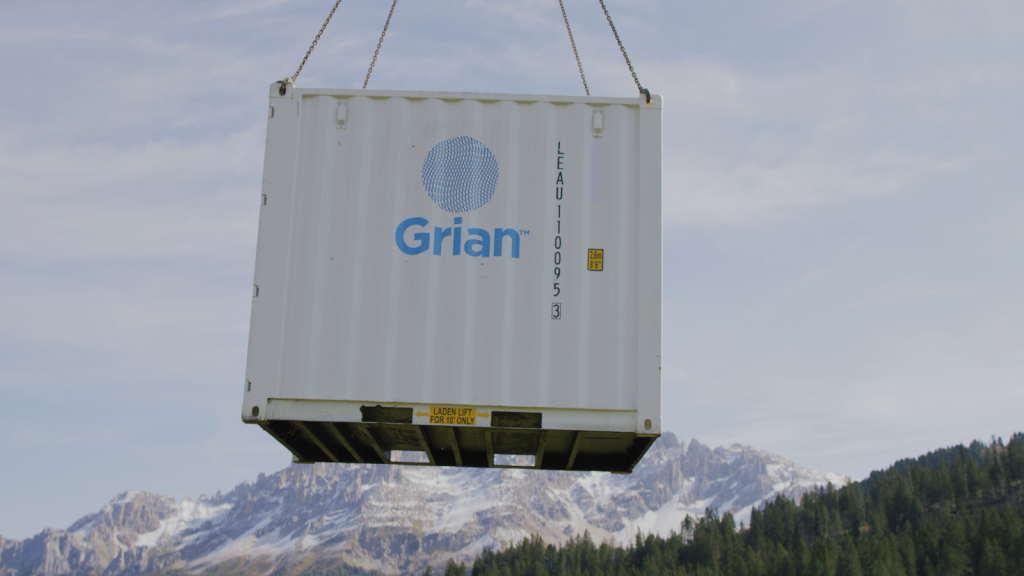 Although a low spend initially, diesel generators are not an economical, safe or environmentally friendly investment. Both State Agencies and NGO’s in the first World must now consider alternative energy sources for developing countries.

The Sun – The Earth’s Reliable Resource

The Earth receives approximately 173 trillion kW of energy from the Sun at any time throughout the day which is more than 10,000 times the energy that the entire world uses. Almost all of the world’s developing countries have huge solar power potential. Most of Africa has approximately 325 days of strong sunlight yearly. Harnessing the power of the Sun in developing countries is a fantastic alternative to fossil fuel energy supply. Yet, the countries that receive the most solar energy are often the ones who benefit the least from it due to a lack of knowledge and capacity to harness this renewable source of energy and convert it into electricity.

There are two ways in which the power from the Sun can be used:

Solar thermal devices use collectors to absorb sunlight and produce heat. This system is used for heating and cooling but also for drying crops, pasteurizing water and cooking. This type of power harnessing can also be used to provide electricity by using a combination of mirrors and tracking systems to focus a large area of sunlight into a small beam. This means that solar-thermal energy can not only provide efficient sources of energy for food production and cooking but also provide a supply of electricity for daily use.

Solar photovoltaic systems use solar cells which are linked together in solar panels to convert light into electricity. They can range from a few cells with the capability to run a calculator to huge solar power stations which have thousands of solar panels. Photovoltaic systems connected to the electricity grid require a device to convert the direct current (DC) to alternating current (AC). Off-grid photovoltaic systems often include an inverter but also require batteries to store surplus energy and an electronic charge controller to prevent overcharging. 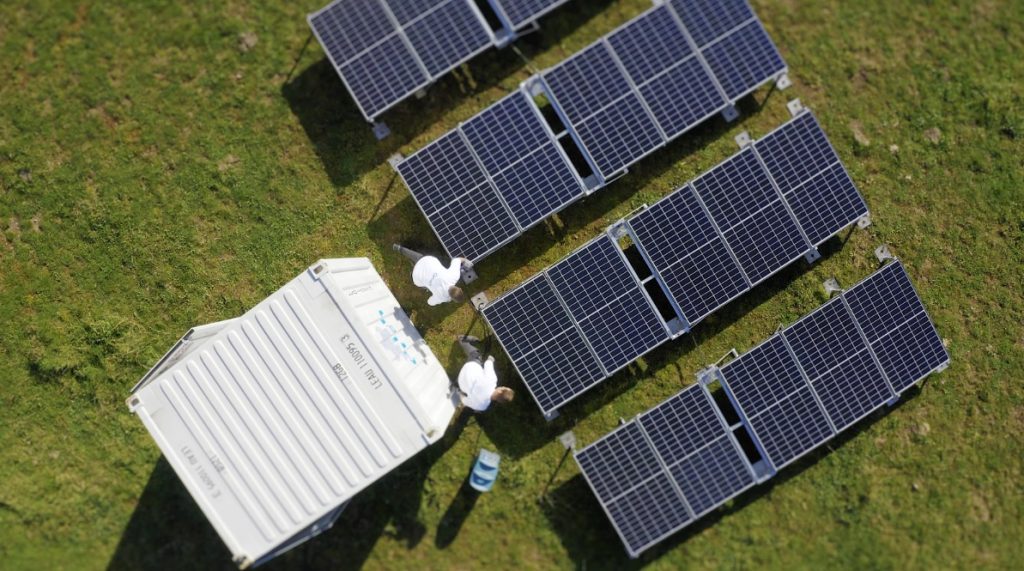 One of the key barriers to solar energy is the cost associated with the technology. However, once installed the energy generates itself with no further investment needed. This is in stark contrast to diesel-fuelled generators who have a low initial cost but a high refuelling cost and high maintenance costs.

Solar energy leads to a more cost-effective investment as a constant supply of diesel and the associated maintenance and logistical issues are not a worry. In the long run, solar energy makes financial sense and helps to contribute to a sustainable future.

With no requirement for fuel supply or maintenance, our Grian™ system outperforms conventional diesel generators and reduces the requirement for the substantial logistical support they demand. As a small solar solution, Grian™ systems provide a local solution to a local problem. The village assumes responsibility for their own systems, including the security and basic maintenance for them, while enjoying the benefits at a local level.

Another barrier is a lack of investment. Governments must take a role in making solar energy affordable through supporting the system via investment in research and development and providing subsidies to increase the uptake of solar power. Such subsidies must favour those in poor, rural communities who are in most urgent need of a renewable, dependable source of power. Unlike “big solar,” small solar systems such as Grian™, also avoid corruption and disputes that are often associated with big solar energy projects, making it a safer option for many local communities.

Scaling up the use of solar power in developing countries will require a combination of Government support, investment, scientific improvements, policy initiatives and collective action.

Below are some of the Co2 emission savings associated with Grian™

Corporate responsibility is a huge consideration for businesses with operations in developing countries. A small solar energy solution such as Grian™ can be used as a vital tool for corporations seeking to boost their sustainable practices and support the surrounding communities that their operations are having a negative impact on. Our system is an innovative, effective way for companies to help poverty-stricken communities in the global fight to save our planet. In terms of the prevention of CO2 emissions, one Grian™ system prevents more than 300 Tonnes of C02 being released into the atmosphere, which is a significant figure. Our powerful solar energy solution can be placed in areas where the company operates helping to offset their carbon footprint while giving back to local communities.

Partnering with Grian™ helps to give any business the opportunity to support environmentally friendly practices and greatly improve the lives of those living without access to clean, sustainable energy. We have a variety of solutions available for all industries, environments and locations. No matter where your company’s operations are located, we can offer a solution to give power to those living in surrounding communities and/or to the company’s facility itself.

A fantastic example of solar power in use comes from Dharnai in India. This village utilises a 100-kilowatt solar power system which allows 450 homes and 2,500 residents to cook whenever they want to and to walk the streets feeling safer. Solar power has even been utilised here to provide clean water via a solar powered water pumping system.

Grian™ is a rapidly deployable solar energy solution aimed at supporting any organisation or agency with a remote energy generation requirement. Developed to provide the energy solution for militaries, aid agencies, disaster relief, expeditions and remote populations, our solution can help provide rapid, renewable energy where it is needed most. The team at Keel Strategic have an experienced military background having worked and lived in war-torn areas for many years. One Grian™ System is at least $10K cheaper over its lifetime than its equivalent diesel generator, has no maintenance costs, no logistical tail, provides no risk to life, and each unit prevents more than 300 Tonnes of C02 emission into the atmosphere. This can allow corporations, charities and communities to harvest Grian’s™ CO2 offset and trade this commodity to further balance out the cost of the system throughout its lifetime. An easily transported, timely solar energy solution such as Grian™ goes beyond other conventional energy systems to deliver sustainable energy as a complete solution.

The time is now for State Agencies and MNC’s to act on behalf of developing countries. Grian™ is the solution the World has been waiting for. To learn more about Grian™and how we can practically supply clean energy to third World countries, schedule a chat with us here.

You can find out more about which cookies we are using or switch them off in settings.

This website uses cookies so that we can provide you with the best user experience possible. Cookie information is stored in your browser and performs functions such as recognising you when you return to our website and helping our team to understand which sections of the website you find most interesting and useful.

Strictly Necessary Cookie should be enabled at all times so that we can save your preferences for cookie settings.

If you disable this cookie, we will not be able to save your preferences. This means that every time you visit this website you will need to enable or disable cookies again.